This month's photography theme for Friendship Vignettes is...

It will be our 2 year wedding anniversary tomorrow so I thought I would share with you one of our creative personalised wedding presents.

What does it say on this lazy susan?


And if I spin it around, what does it say now?

Can you see them both if I show you the picture on its side?

Great to make quickly to serve alongside other Mexican meals or on a buffet.

There is an area of Bradford to the east of the city centre called Little Germany. It is full of large, stone Victorian warehouses which the Jewish merchants spent large amounts of money building in the 19th century. Many of the merchants came from Germany hence the name "Little Germany". Many of these large warehouse buildings remain and have been converted into modern offices or pent-house flats.

On Chapel Street, there is a stone carved armchair and grandfather's clock.

I am a Christian and believe that God created the world. I cannot help but thank God for the beauty he has created in these beautiful tulips, which I bought reduced from the supermarket! They are brightening up our living room at present.

Beautiful aren't they?
Posted by Ruth at 12:00 am No comments: 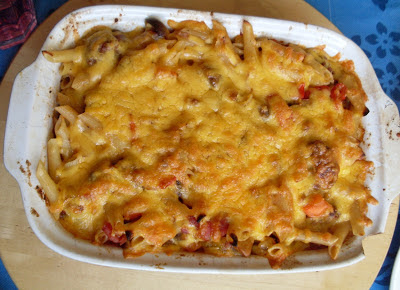 The hotel was constructed by the Midland Railway Company who owned the station next door, known as Forster Square Railway Station. Construction of the building was started in 1885 and it took five years to complete it.

It is still known as the Midland Hotel and functions as a hotel today. It is presently a Grade 2 listed building.


I have been inside on a few occasions the most memorable being for my Hen Party where we enjoyed "Afternoon Tea" together in one of their suites. It is beautiful inside and decorated very elegantly, a great place for lady's to share afternoon tea together.
Posted by Ruth at 7:00 pm No comments:

Email ThisBlogThis!Share to TwitterShare to FacebookShare to Pinterest
Labels: BRADFORD

Last year in the Autumn I bought some Aubergine seeds in the sale at Asda and have been waiting until the Spring to plant them.

It has to be said I am not the most green fingered person ever, so when I first saw some shoots appearing I was very pleased and proud of my little plants.

I now have 7 little plants to carefully water and feed and hopefully, weather permitting we will have some aubergines to eat in the Autumn...

This weeks FOODY FRIDAY has a short story attached to it...

If you know us or have read all of my blog you will remember that last summer we spent travelling around New Zealand for 10 weeks...

...whilst we were there we discovered Cadbury's Marvellous Creations Jelly Popping Candy Shells and it's AMAZING!


I am generally not the biggest fan of Cadbury's chocolate but this is great!

I was very happy when I noticed that WHSmith at work advertising this chocolate so I went on a hunt to find a big bar in the shop....YUMMY!!!!!!
Posted by Ruth at 12:00 am No comments:

In 2005, there were plans a foot for a huge new shopping centre development in the city, over the site of the original township of Bradford and the Bradford Beck near the Cathedral.

Work was started in 2005 with the demolition of the Broadway Shopping Centre, an archaelogical dig of the area and the site was excavated and prepared for the start of the new development. Unfortunately the work came to a halt overnight with the beginnings of a national recession.

The site was left as a huge HOLE for a few years before the Council developed some of the site into an Urban Garden.

I do like the Urban Garden as it has created a space in the City Centre which allows some of the older more ornate buildings to be seen which have been hidden away by large buildings for many years.

There are talks that 2013 might be the year that works recommences on the site but we only time will tell, I do hope whatever is built here reflects the beautiful buildings which surround it.
Posted by Ruth at 7:00 pm No comments:

Email ThisBlogThis!Share to TwitterShare to FacebookShare to Pinterest
Labels: BRADFORD

A good friend of mine has recently had some of his work printed onto greetings cards to sell. I think they're really clever designs and look AMAZING on the mantlepiece as a birthday, christmas or thankyou card, etc. 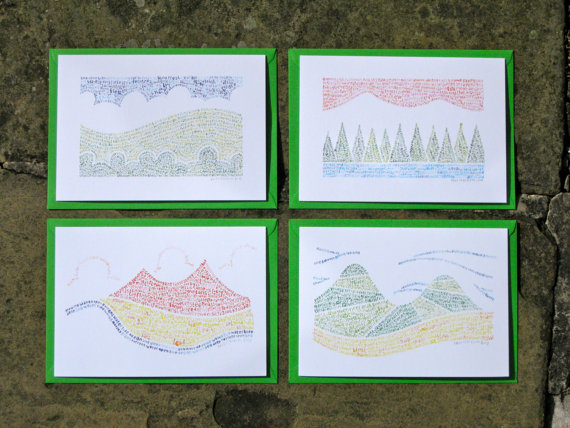 He sells his cards for £3 each or the whole set for £10 on Etsy - Green Leaves and Trees, take a look at the link to view more information behind the artist and the cards available.
Posted by Ruth at 5:00 pm No comments:

Today's recipe is one of my all time favourites, my mum used to make it lots of us when we were children and so when I went to university I took this recipe with me!

We are really fortunate to host the National Media Museum and Imax Cinema complex in Bradford city centre. It was previously known as the National Museum of Photography, Film and Television.

It is situated between Bradford Central Library and the Ice Skating Rink on Prince's Way and there is free entry to the exhibitions although entrance to the cinema's is not free.

My favourite part of the museum is the area where you can sit in a small booth with your friends and choose any TV programme from the past to watch an episode of. They have a large catalogue of what is available to watch and usually only one episode of a series is available to view, but it can take you back to your childhood with Muffin the Mule and the likes.

The Bradford International Film Festival is hosted here annually.
Posted by Ruth at 7:00 pm No comments:

Maria in the Wood